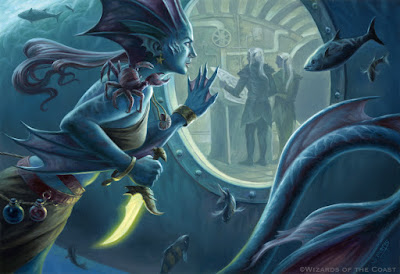 Upon opening the door and confronting the 3/4 nude pirate deep in the bowels of the ship, Rasool steps into the room and closes the door, but not before Hank can establish a telepathic link with him to let him know when the escape is ready.

Dagrim dismantled the magic trap that they had detected on the port side doors. The rest of the party quietly searched the rest of the hold, finding some papers and a chest. Within the room, there was a conspicuous negative space compared to the hold outside the room. Dagrim searched the back wall and found a secret door that led to a hatch in the floor. Around this time, Graycen started to walk towards the fore of the ship to a steamy section of the hold, but was stopped by reminding her what happened the last time she tried to go off solo and thought the better of it.

Beneath the hatch, there was a steel tube with a ladder leading down to another hatch, which meant they had finally found the submarine. Convinced the sub contains the orb the dragon asked them to retrieve, the party started towards the control room that they spotted while waterbreathing the day before. Hank tells Rasool they are in the sub and the party was closing the sub hatch and barring it. If he needs to escape, go up to the Harpers. Proceeding forward on the catwalk, the remainder of the party manages to be just stealthy enough to reach the area above the control room, with two ladders leading down. Taking advantage of the opportunity to ambush the two drow and the rock gnomes working below. Hoping the gnomes are working under duress, Dagrim casts sleep and knocks them out.

The fight turns bad as soon as the drow can react. Graycen climbs down to attack from melee and is quickly stabbed multiple times by one of the drow, and killed outright. From above, the party continues to focus fire on one of the drow captors, but within the confines of the submarine, their arcane tolling of the dead seems less effective than usual. Hank sees the fight going badly, and decides to intuit the controls that are now ungnomed, and attempts to tear the submarine from the ship, hoping to start the ship flooding through the open hatch. Two attempts to incomprehensibly flip switches and turn dials with his mage hand result in nothing of the kind. The wounded drow climbs up the ladder and kills Hank outright before Chip's eyes. Chip is still firmly in the denial stage of the Kübler-Ross model when his grief is cut short by his own similar demise. Dagrim angrily attempts a killing blow to the drow to cover Marty's escape, but he likewise quickly falls before the drow who has clearly outmatched the party.

Marty manages to flee up the ladder to the hold and block the hatch, briefly securing his escape.
Meanwhile, Rasool decides to abandon the intimidation tack that was not working, and starts asking probing personal questions of Jarlaxle. Jarlaxle indicates that he was already made aware of the party and their dealings in Trollskull manor from some unknown source. After vicariously telepathically witnessing the demise of Graycen and Hank, Rasool enters the bargaining phase quite rapidly. Jarlaxle offers him his life if Rasool will return with one Eye of Golorr.

Rasool and Marty are somewhat depressed as they head topside to gather the Harpers and limp back home in the rowboat. By the time they pull ashore, they have accepted their losses and are determined to gather some new allies by auditioning prospective adventurers in the tavern that evening.
Posted by Asaris at 3:46 PM